On 20th October 1976, Diego Maradona, then a 15-year-old boy from the slums of Villa Fiorito, would make his professional debut for Argentinos Juniors and set in motion a chain of events that would permanently alter the course of football history.

In a new series currently streaming on Prime Video, titled Maradona: Blessed Dreams, a colorful portrait of the sheer enigma that was Diego Maradona has been presented to Indian viewers in multiple languages. Maradona’s meteoric rise from poverty and his transformation into a footballing god has been documented in five episodes that pay a fitting tribute to the legend’s working-class roots.

In the 1970s, media outlets in Buenos Aires were already aware of the sheer potential in Diego Maradona’s feet. The youngster was a ballboy at the stadium and his half-time magic show – a keepy-up routine that would carve its own legacy at Napoli over a decade later – was a massive crowd-puller. Maradona became an instant hit in the city that raised him and became an emblem of representation for his people.

Argentine football in the 1970s was a way of life for its people. The South American nation was rife with political tensions at the time and it was this dystopian social environment that birthed the genius of Maradona. To children in the streets, football was an irreplaceable escape from reality. The prevalent strife gave Diego Maradona a quality that set him apart from his peers: an irrepressible fighting spirit.

Argentinos Juniors had already gained renown for their youth program at the time but faced an unusual conundrum when they tried to sign Diego Maradona. Association rules prevented players younger than the age of 14 from signing official contracts, but the club’s representatives would leave no stone unturned to tap into Maradona’s talent.

Diego Maradona’s childhood home in Villa Fiorito has been officially named a ‘historic location’ by the Argentine government https://t.co/Rfx9z1gRbr

The result? Diego Maradona would represent Argentinos Juniors informally in local tournaments, with a team that has now gone down in history: Los Cebollitas. Argentina’s footballing community began to take note of Maradona’s precocious talent and his exploits eventually earned him a place in the national setup.

Diego Maradona spent several years in the youth and senior teams of Argentinos Juniors before completing a move to Boca Juniors. El Pelusa was already a household name in the country after his debut with the Argentina national team and added a few more feathers to his cap with a legendary performance against Boca’s arch-rivals, River Plate.

Napoli and the World Cup – Maradona in the history books

It was only a matter of time before the giants of Europe took notice, and La Liga giants Barcelona landed Maradona’s signing for a world-record fee in 1982. The Argentine superstar produced magic and uproar in equal measure in the Catalan capital and decided to end his controversial association after two eventful years at the club.

Diego Maradona chose Serie A club Napoli as his next destination and as luck would have it, the southern Italian city was the ideal fit. The people of Naples have historically struggled to match up to their more affluent northern counterparts on the Italian peninsula, and Maradona’s arrival was heralded as a sign that the times were indeed changing.

Maradona knew more than a thing or two about dismantling social norms and inspired millions of Neapolitans with his wizardry. The Argentine boy wonder would never forget where he came from and paid tribute to the land of his birth at the 1986 FIFA World Cup.

Argentina was not the favorite at the tournament by any means, but they did have the best player in the world in their ranks. Diego Maradona was worshiped in Argentina and established his status as a bonafide footballing deity by carrying the Albicelestes to a historic World Cup triumph. 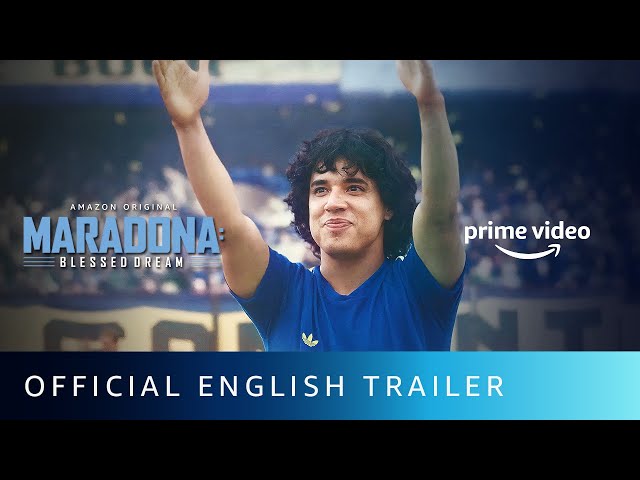 Football’s all-time greats all have one thing in common. They all overcame daunting odds and challenges in their younger years and went on to write their names into footballing folklore with their near-mythical exploits. Diego Maradona faced impossible economic circumstances on the streets of Villa Fiorito but inexplicably fought his way to the top of football’s complex pyramid.

The first five episodes of Prime Video’s new series, “Maradona: Blessed Dream”, are available on the website for Indian audiences. The biopic was released on the 29th of October with dubs in English, Hindi, Tamil, Telugu, and Bengali, and celebrates the life of one of the greatest sportsmen in history.

Viewers of the series and fans of the sport can also look forward to five new episodes, which will bring to the fore the circumstances surrounding Maradona’s World Cup glory and his inspirational stint at Napoli. Diego Maradona is one of the greatest players of all time and remains a beacon of inspiration to the millions of youngsters working their way through South America’s competitive ranks today.

Diego Maradona would have been 61 today.