It appears as though Jake Paul could bid adieu to the sport of boxing.

The 24-year-old recently posted a tweet suggesting that he may call it a career with four wins on his resume.

Paul is coming off a huge victory over former UFC star Tyron Woodley. He went the distance with ‘The Chosen One’ and had his hand raised after eight hard-fought rounds.

Now that he has finally registered a win over a formidable opponent in Woodley, Paul has seemingly hinted at early retirement.

Updating the status of his fairly young combat sports career, Paul recognized himself as a “retired boxer” in his post.

Paul made his professional boxing debut in January 2020 against fellow YouTuber AnEsonGib. Commencing his boxing journey in spectacular fashion, Paul knocked out the UK YouTuber in the first round.

He then took on Nate Robinson and produced a viral knockout of the former NBA ace.

Garnering a good deal of hype in the combat sports world, Paul then challenged Ben Askren, who had years of experience in the fight game and particularly in wrestling.

Askren was no match for Paul’s speed and power. He was sent crashing to the canvas in the first round.

If Jake Paul is serious about retiring from boxing, Tyron Woodley may never be able to exact revenge on his loss to ‘The Problem Child’.

The 39-year-old MMA veteran demanded a rematch with Paul and has agreed to fulfill the condition that the 4-0 boxer put forward.

During his interview with MMA Junkie, Jake Paul had said he would give Woodley a rematch if ‘The Chosen One’ gets his name tattooed. However, with Paul hinting at retirement, the rematch may never come to fruition.

“If he wants to get the tattoo, posts it on his Instagram feed, be a man of his word, and do it fast, then it’s highly possible. I think a lot of people will want to see that and I know I can come back when my legs are feeling better and finish him off. So a rematch is definitely possible. let him get the tattoo and we’ll assess it from there. If he doesn’t hurry up and do it, then there’s a million people knocking at the door,” said Jake Paul. 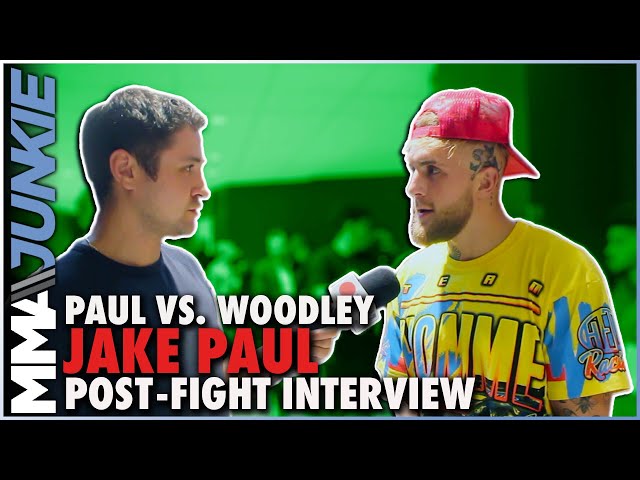 From Khabib Nurmagomedov to Jake Paul, follow SK MMA to satisfy all your MMA needs!