Social Media is one toxic place to be in. What started out as a cool place to share pictures, videos have become nothing less than a dumping ground wherein faceless individuals dropped cheap and nasty comments on the personal life of celebrities and individuals. Popular actress and host, Mandira Bedi recently faced such an incident wherein she was asked by an anonymous account as to where did she adopt Tara. The question mightily upset Mandira and she lambasted the troll. A social media user had asked Mandira Bedi (and the audacity to even ask this is alarming), “Madam from which slumdog centre did you adopt your prop daughter?” another wrote, “The adopted street kid looks completely out of place…u greedy narcissists are scarring the slumdog for life.” Also Read – Bigg Boss 12’s Srishty Rode is having a gala time in the Maldives, and THESE pictures are proof

Mandira Bedi gave a fitting reply to the troll saying, “People like this need to be given a special mention @bollywoodforevaa. You got my attention, you piece of shit.” Have a dekko at the picture here: Also Read – The Big Bull actress Ileana D’Cruz sets hearts of fire with her photoshoot in white

Another nasty troll had also asked her about Tara and the actress slammed the person, saying, “More from the model citizen. He calls himself Rajesh Tripathi, which definitely isn’t his name, because sickos like this are the biggest cowards too, who only know how to wag their tongues behind the shield of anonymity.” Here’s another picture: 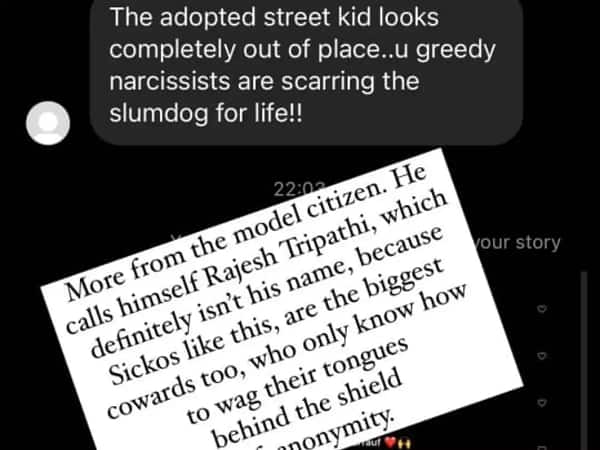 Mandira Bedi and her husband, Raj Kaushal welcomed Tara last year in July. She had posted a heartfelt note saying, “She has come to us like a blessing from above, our little girl, Tara. Four years and a bit with eyes that sparkle like stars, sister to her Vir. Welcoming her home with open arms and pure love. Grateful, thankful. blessed…Tara Bedi Kaushal became a part of our family on 28th July 2020.”

Mandira Bedi is not the first to have been trolled about adopting a kid. Hitherto, Mahhi Vij and Jay Bhanushali who are foster parents of Khushi and Rajveer, Sunny Leone who adopted Nisha have been trolled and questioned on their parenting on their adopted/foster children.