Prithvi Shaw came up with the goods on Thursday as he helped Delhi Capitals hammer Kolkata Knight Riders at the Narender Modi Stadium in Ahmedabad by seven wickets. Prithvi smashed a whirlwind 82 off 41 balls to set up the win. Following the win, the young DC opener received praise from all quarters for his aggressive style of batting. But there was one message that is going viral. The message is from Prithvi’s rumoured girlfriend, actress Prachi Singh. Also Read – PBKS vs RCB Dream11 Team Prediction VIVO IPL 2021: Captain, Fantasy Playing Tips – Punjab Kings vs Royal Challengers Bangalore, Probable XIs For Today’s T20 Match 26 at Narendra Modi Stadium, Ahmedabad 7.30 PM IST April 30 Friday

Prachi took to Instagram after the match and posted a story featuring Prithvi. While the first image was of Prithvi speaking at the presentation after being named man of the match, the second image is a collage of the DC opener with the awards he won on Thursday night. Also Read – IPL 2021: I Miss The Fans in The Stadiums, Says Kevin Pietersen

But what made the Instagram post interesting was the captions: The first post was captioned, “So proud of you’, while the second one read, “Need a new suitcase to pack them all.” Also Read – RCB vs PBKS IPL 2021: Punjab Kings vs Royal Challengers Bangalore Today’s Probable XIs, Pitch report, weather forecast, head-to-head

Here are the two images: 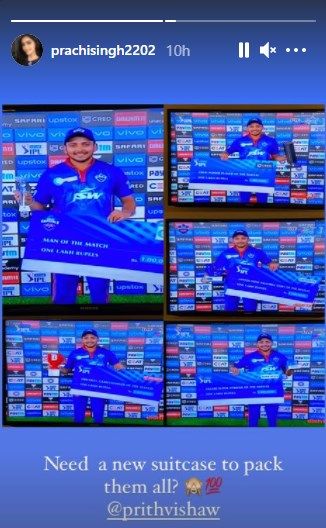 Despite there being nothing official from the cricketer or the actress, it is pretty clear that they are fond of each other and that sparks speculations as well.

Shaw smashed a belligerent 82 off 41 balls and hit six fours off the first over while chasing 155 to win. He became the first player to hit six boundaries in the first over of an IPL match ever. His good knock also meant he was named the man of the match.