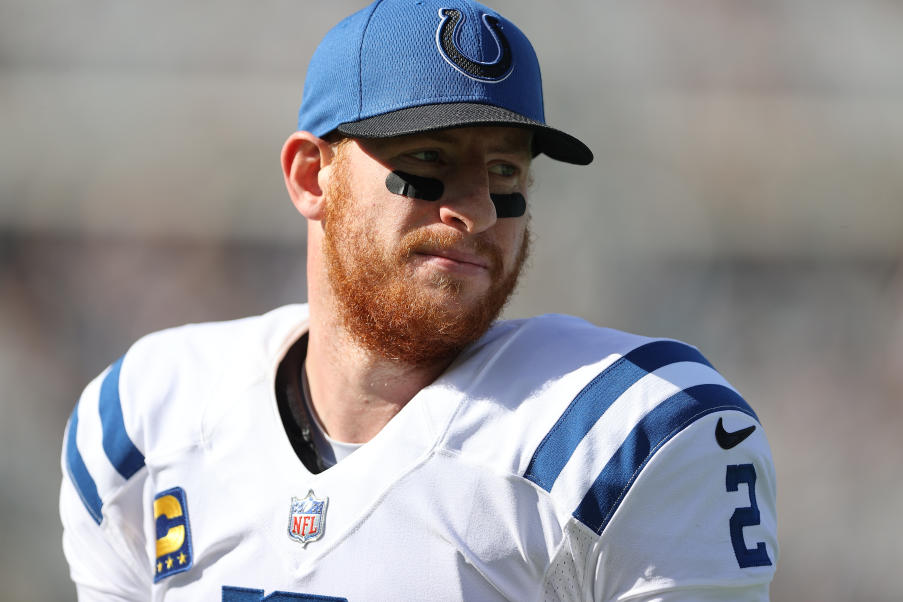 
At some point in failure, an NFL general manager like the Indianapolis Colts‘ Chris Ballard has to step to a microphone and show the firmest of grasps on the team’s situation. Think of it as the anti-Joe Judge moment, where someone in power holds a mirror up to their team and and bluntly reflects what everyone else can see — from the franchise owner, to the coaching staff, to the fan base that is pulling its hair out.

Ballard had that moment Thursday, when he all but said what some in the organization are thinking about quarterback Carson Wentz. It went something along the lines of: “I’m no longer sure that this guy is the answer we can trust.”

That’s what Thursday’s season wrap-up amounted to for Ballard, who appeared deeply upset following a stunning Week 18 drubbing at the hands of the Jacksonville Jaguars, which cost the Colts a playoff berth and amounted to one of the most embarrassing losses of the NFL season. The loss showcased a downside to Wentz that has existed for years, ultimately costing him his starting job with the Philadelphia Eagles and opening the door to a second chance in Indianapolis. After only one season, the familiar echo of Wentz’s problematic decision-making already has Ballard wavering on a player the Colts acquired for a first- and third-round pick.

“When we made the decision to make a move on Carson, at the time of the decision, we felt good about it,” Ballard told reporters. “And I still don’t regret it. … I won’t make a comment on who’s going to be here and who’s not going to be here. That’s not fair.”

It didn’t end there, either. Ballard used words like “pissed” and “embarrassed.” He talked about the impact on ownership and the city. Basically, he took a microphone and tapped into the roots of the heartache that everyone in and around the Colts is feeling this week. It will all resonate with the fan base and team owner Jim Irsay and the coaching staff. It should also resonate deeply with Wentz, who is on one of two paths. Either he’s going to get released next month — which still seems unlikely — or Ballard is challenging him along with head coach Frank Reich, who also passed up a chance to reaffirm a 2022 commitment to Wentz earlier in the week.

Frankly, none of what happened down the stretch or the season finale is particularly surprising to the Eagles. As it became apparent the organization was going to move away from Wentz permanently, the themes that surrounded the quarterback were consistent. There was frustration that he often reverted back to bad mechanics, no matter how much coaching emphasis was placed on it. He had a stubbornness that irritated coaches, most notably Doug Pederson, whose crumbling relationship with the quarterback played at least a small part in Pederson’s firing. And most of all, Wentz had a penchant for making things more complicated than they had to be in the offense, either failing to embrace the simple plays or simply choosing to force bad decisions. So much so that the Eagles’ internal data on dropped interceptions placed Wentz amongst the NFL’s worst when it came to that category.

The hope for the Colts was that Reich was the key to resolving some of these problems. Not just a fresh start, but also a more streamlined coaching process, which featured fewer people in Wentz’s ear to create noise or confusion about how to fix his issues. Unfortunately for Indianapolis, the simplification yielded familiar results, not to mention his continued struggle to sharpen his mechanics and move him past a reversion to bad habits under pressure.

Ballard touched on both realities Thursday to varying degrees. As he put it, he told Wentz: “Make the layups. The throw in Arizona was incredible. Maybe only two or three other QBs can make it. But make the layups.”

The question now becomes what’s next for Wentz in Indianapolis. While Ballard and Reich sound like they’ve quickly come to a crossroads, it’s not quite as simple as cutting losses and moving on. Wentz has a cap charge of nearly $28.3 million next season. Cutting him would still cost $15 million against the cap, but also free up roughly $13.3 million, leaving the team with net cap loss of nearly $1.7 million. Given that math, the quandary is simple: Is there a better quarterback option available for the Colts? And can the team make that work with $13.3 million?

As it stands, the answer looks like no. In terms of an absolute upgrade this offseason, the trade options would be expensive and are largely unknown at the moment — given that there’s no clarity on what will happen in Seattle with Russell Wilson or Aaron Rodgers in Green Bay. Even if the Colts see a player like Kirk Cousins or Derek Carr as an avenue, there’s little guarantee either of those players will get dealt in a regime change. It’s also worth considering that in any trade scenario, Indianapolis already lacks a first-round pick this year, putting the team behind a number of other quarterback-needy franchises that would be able to bring better trade packages to the table in the event a big name becomes available. That said, if the Colts cut Wentz, their total aggregate cap space in 2022 to work with would approach nearly $60 million. Even with other extensions to consider, that gives Indianapolis some flexibility.

Indianapolis has roughly a month to make a decision here. The next league year begins on March 16 and Wentz’s contract has some guarantees that kick in shortly after. What appears more likely for Wentz is that this week shapes up to be a final notice. Either he works this offseason to operate inside the boundaries of the offense and stops taking gambles that cost the franchise in the long run, or he’s out for good after 2022. Indianapolis would avoid a dead cap charge in that scenario, too, with Wentz’s contract offering no more guaranteed money after next season. The Colts could also seek other less-expensive backup options this offseason, to give themselves another card to play if Wentz once again fails to shed bad habits.

However the front office and coaching staff steers this, there’s now little ambiguity in the picture. Wentz is at the brink in his starting career. A situation that was supposed to be an opportunity to regain footing as a franchise quarterback ended in familiar failure. There won’t be another chance in the Colts organization after this. And even that chance is going to be on the shakiest of grounds for the next month.