Bigg Boss OTT contestant Urfi Javed has been making headlines daily for her outrageous outfits. Well, she is a pretty girl, and sometimes she does look great. The actress was photographed in the city in a dress that looked like a rip-off of the outfit that Kendall Jenner wore the nuptials of Lauren Perez. The cut out dress was as daring as one could imagine it to be. The wedding of Lauren happened on November 11, 2o21. She looked lovely in a light blue dress. Kendall Jenner had chosen a dress from Monot for the evening. The lady is known for her love of risque dresses. The outfit had diamond cut outs and flaunted her toned frame. Urfi Javed’s dress was in the same design. Also Read – Bigg Boss 15: Moose Jattana, Karan Nath or Akshara Singh – which Bigg Boss OTT contestant you want to see as a wild card entrant? Vote now

Urfi Javed gets royally trolled for her outfits and this time it was no different. Everyone was super quick to point out that she had worn the same dress as Kendall Jenner. A user wrote, “That’s Kendall’s dress,” while another one commented, “Copied Kendall Jenner dress.” A person wrote that Ranveer Singh was notorious for his outfits without any good reason. The comment read, “Ranveer Singh to yuhi badnaam hai.” Urfi Javed does not give a damn to such trollers. According to her, if the same stuff was worn by star kids people would have called them fashionable. Also Read – Bigg Boss 15: Nishant Bhat longs for Moose Jattana on Salman Khan’s show; makers plan to bring in Karan Nath as the new wild card?

Coming to Kendall Jenner, the outfit cost Rs 1.2 lakh. Her BFFs Bella Hadid and Hailey Baldwin also looked great. Check out the pics… Also Read – Bigg Boss 15: Is Neha Bhasin making an entry as a wild card on the show? 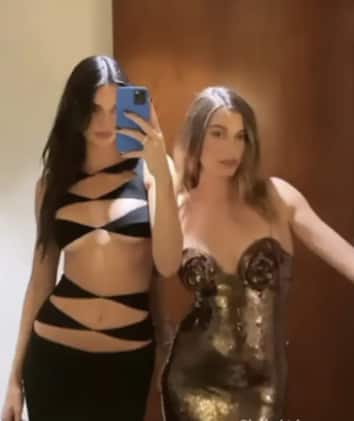 Urfi Javed is rumoured to be one of the wild cards who is being considered for Bigg Boss 15. The lady recently spoke about how she had a bad experience working for a web show. Whatever, Urfi is surely getting noticed and how!