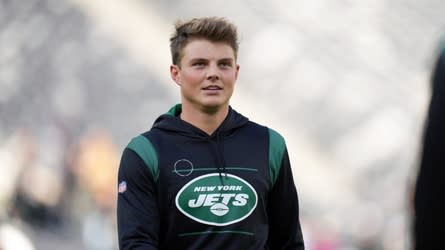 
In a battle between the first and second overall picks from last year’s draft, it was the legs of Jets quarterback Zach Wilson that would garner the early headlines.

Wilson got the Jets on the scoreboard against the Jacksonville Jaguars Sunday with a 52-yard scamper that also made history for the rookie out of BYU. The play is the longest touchdown run by a quarterback in Jets’ history and gave the team a 6-3 lead at MetLife Stadium.

On a third-and-5, with four minutes to go in the first quarter, the Jaguars blitzed Wilson with a six-man rush. The rookie avoided a sack and ran to his right before deciding to run for the first down. Running towards the sideline, he outran safety Rudy Ford around the 30-yard line before riding the side to the Jaguar 15-yard line. Wilson then eluded safety Andrew Wingard and dove for the touchdown, completing the historic run.

The run broke the previous record set by Sam Darnold, a 46-yard run from last year against the Denver Broncos. In 10 games this season, Wilson has yet to break 33 yards on the ground in any game. With his historic run on Sunday, he’s already set a career-high for rushing yards.

Many of Wilson’s teammates that are injured or on the COVID list took to social media to react to their quarterback’s incredible play.